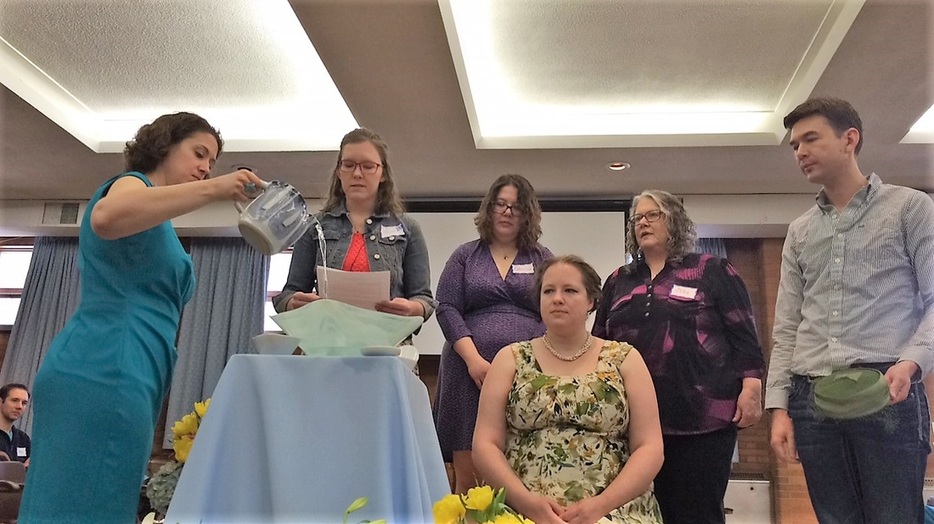 ​Good morning everybody!  Happy Easter! My name is Lisa Quinn and I’ve been coming to UVC for a few years now. And there are two things you need to know about me today; one is that I’m super happy and excited to be here and the other is that I am an ugly crier. So, I am going to keep it together for this. I am. This awesome eyeliner is going to make it through the next two minutes and thirty seconds intact.

So. I am an unabashed nerd. I love people; I’m a huge extrovert; but if I had to choose between people and books...ehhhh, you know...and my whole family, even most of my chosen family, is also made up of nerds.  I just spent a couple of months immersed in them, and it’s like, rocket scientist, computer programmer, astronomer, naturalist, inventor. So I always depended on my brain for truth. Because that’s where we look, right? We look at the stars and the trees and the birds and we do a lot of math and dissections and problem-solving and we get truth.

So when you start talking about Methodism and you get this tidy (but huge!) package, of okay, so prevenient grace is how God is there for you before you perceive or accept God; and then justifying grace is when you do accept God’s love; and then, (fingers crossed!) God works on you and you become a better person and the world becomes a better place and yaaay, that’s sanctifying grace, that’s pretty great.  It makes sense. Even if it doesn’t feel true at first, it’s something manageable to think about.  And as I said, thinking is how we find truth.

Except thinking is not enough.  I have really learned that over the past few years. My life has fallen apart and been put back together over and over and over, and God has always been there. When I’ve turned to God, she has never turned her back on me. God’s been there as I’ve been broken, and God has put me back together as a new person, a person who's ready to accept God. And this new person has been thinking a new thought lately: it’s Second Corinthians, chapter 5, verse 17. “So if anyone is in Christ, there is a new creation: everything old has passed away; see, everything has become new!” I’ve become new.

And I’ve depended a lot on God lately, especially over the past year, which has been incredibly difficult. In January, I left my partner of thirteen years. Two weeks later, my father’s sister died; two weeks after that, my father’s little brother died. Maybe you’re not supposed to have favorite relatives, but my uncle Mark was my favorite.

At Mark's funeral, I read these words from Mary Oliver:

“to live in this world

you must be able
to do three things.
to love what is mortal;
to hold it

against your bones knowing
your own life depends on it;
and, when the time comes to let it go,
to let it go.”

But if I had been here at Urban Village, I might have used these words from a Welcome to Night Vale tweet instead. “Death is only the end if you think the story is about you.”

God has been teaching me that the story is not about me, or you, or any one of us.  There’s more to the story. And I’m finally ready--and incredibly happy--to accept that.​

The Dwarves are for the Dwarves: Urban Village Church, February 2013 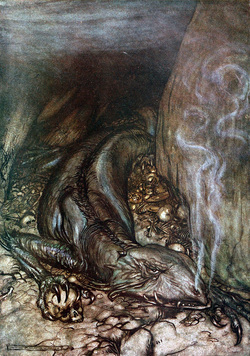 Hi, everybody. My name is Lisa Quinn and I’ve been coming here for about a year. If you have met me, you know I’m a huge, huge book geek. I’m always reading. I sometimes read four or five books a week. And one of my favorite series is the Chronicles of Narnia. I hope some of you have read it or seen the movies, because it’s really helped me understand what’s happened to me over the past few years.

There’s a scene in the books where Eustace Clarence Scrubb, who is a really nasty and unpleasant person, has some bad stuff happen to him, including being turned into a giant green dragon. God, who’s appearing as a lion, cuts one claw through his thick, horny hide and peels it off, really painfully. It hurts like crazy, (they say it feels like picking off a scab, blech) and when it’s done, Eustace is this tiny, pink, naked creature. He bathes in a pool of water, and is changed back into a boy. He accepts God’s existence and love, and becomes a very different and better person.

This is a pretty obvious Christian metaphor, right? God changes him through baptism. Not subtle. But because I was raised outside Christianity, I didn’t catch on to it at first. And when I did finally notice it, I was heartbroken. I felt totally cheated and lied to, that these beautiful fantasy stories were secretly--secretly--a nefarious and underhanded attempt to convert children to Christianity. C.S. Lewis! What a jerk!

Because I was actually raised to believe that all Christians were jerks. All of them. Stupid, ignorant, and weak. If not actually evil. This is what’s hard to say, because it means repeating some gross and nasty things. I hope you’ll bear with me.

So first, Christians are stupid, because they don’t understand science. If they understood science, they wouldn’t need faith. They would know that science has all the answers about where the universe came from, where it’s going, and what we need to do in this life. (The answers are: It comes from nowhere for no reason; it’s going to be catastrophically destroyed; we can’t do anything about it so we might as well please ourselves.) But because Christians are stupid, they believe lies about an old white man in the sky.

Third, some Christians aren’t just stupid and ignorant, they’re also weak. So we shouldn’t judge them too harshly. Since they are people of color or working class, and suffering systemic oppression here on earth, they need to believe there’s something better after death. It’s the pie in the sky by and by. But we, because we’re white upper-middle-class college-educated professionals, we don’t need that kind of hope. We can stand on our own two feet. The dwarves are for the dwarves.

All this adds up to:
​I could go on, but I do also want to say that some of the things I was raised to believe are pretty great. Like that gay people are 100% okay. Because of my church, I never once thought that it was bad or even all that strange to be bisexual. Not once. I always knew that women should be completely equal to men. I always knew that working for peace and justice is much, much more important than the words you say in church. This is all good.

But. Several years ago, I moved to the city and I found a pastor, in the same church, preaching a new kind of message. She said that God is one God, no matter what you call her, and that we are all her children. She said that Jesus is a great and wise teacher and that by studying his life, we can become better people and build a better world. She said that God is a God of love, and the most important thing we can do here on earth is live out that love toward all Creation. As much as we need to believe the right things, we also need to do the right things.

This was a really, really hard message to hear. I mean, it sounds great, right? But it was really hard. It made me confront my own ignorance and stupidity and weakness. I finally came to see that I was a dragon. I was rejecting God’s love out of bigotry and prejudice and stubbornness. I came to finally hear the Christian message of peace, and justice, and love, and think it applies to me.

There has been a lot of crying along this journey. I have been humbled, I have been knocked down, trying to change. I have lost friends, I’ve hurt my family, and I’ve been pretty much constantly embarrassed and ashamed by my own stupidity. But this new belief in God’s love has been so incredible, so powerful, so encouraging, so uplifting, that I cannot go back. I have to take Christianity seriously, and I’m so happy that my dragon hide’s peeled off. I feel like a new person.

And that’s why I’m so glad to have found UVC. I get to keep the good parts of my faith: the belief in justice; the commitment to welcoming different people and different beliefs. And I get more. The conviction that there’s more to the universe than our little perspective; the assurance of God’s love; the example of Jesus and of Christians before us. This church has been really patient with me as I struggle toward understanding Christianity. As I, inevitably, backslide; as I accidentally insult people’s beliefs. I’m in a small group that’s reading the Bible and I always learn something. I come on Sundays and I always find out something new and leave with help for the week.

So I would like to say thank you. Thank you for being here, for being patient with me, for being generous in teaching me and leading me along this new path. And thank you, thank you very much, for giving me back the Chronicles of Narnia.
Proudly powered by Weebly